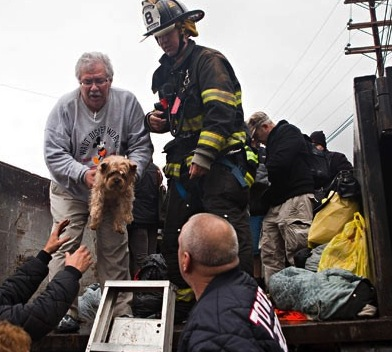 If you want confirmation that goodness can be an inherent part of human nature, Daniel Tomasulo wrote a great account of generosity in the aftermath of Hurricane Sandy. He was in Washington, D.C. when the hurricane struck. As he pulled off the Garden State Parkway and arrived at his shoreline home, he wondered if he’d have time to batten down his home and belongings. He’d only lived in the home a brief time, having moved in only months earlier, and he’d hardly spoken with any of his neighbors. He was shocked, stunned, to see that while he’d been driving home from the nation’s capital, his neighbors had spent near an hour putting his things in order. Water was rising. Trees were down. People had fled.

“What I saw stopped me in my tracks. My neighbors, Tom and Eileen, had done an act of kindness above and beyond anything I might have expected. They had removed ALL of the furniture including tables, chairs, footstools, cushions and whatever else was lying around and brought them up to the house under the protective cover of the porch. Then they secured everything that needed to be tied down. This wasn’t a ten-minute job. If I had to have done it myself it would have taken nearly an hour to move and secure each piece.”

In the weeks following the hurricane, these stories have emerged over and over again, and I’ve been tracking some of them on my Facebook page, on Twitter, and here. Yet Tomasulo sums up the significance of them all in better terms than I’ve yet encountered: “I knew a flood of near-Biblical proportions was coming, but what I didn’t know was that the greater surge would be in the pervasive kindness, altruism and gratitude among people. Caring moves us to act.”

What emerges in his account is how, under the pressure of disaster, human perception and understand can undergo a dramatic shift. What becomes clear, in these times of crises—as on the battlefield in a war—when everything is at stake, including one’s own life, what really matters in life becomes utterly clear. What matters is caring. One emergency worker in Monmouth County left home in Union Beach to help save people trapped in another home. When he returned, everything he owned had been swept away. Even the cement slab beneath the walls of his house was gone. His attitude? He said he was lucky to have survived. His caring for others saved him from being swept away with his possessions. Rather than stand there lamenting this personal devastation, he said he was lucky, again, to be alive to help others. Off he went to do just that. Tomasulo’s lesson: gratitude for what you’ve been given leads to empathy for others who’ve been given less.

“I was lucky,” that first responder told Tomasulo. “I had a chance to help save someone’s life. Some of my coworkers were out of town when the storm hit and they didn’t get that chance. I was very lucky.”

How has your own sense of gratitude informed your actions from day to day? Have you ever experienced a great loss which has opened your heart to others? Do you know others who have behaved in ways similar to this emergency worker’s behavior during the hurricane? Tell us your own stories of how disaster or loss can change the way people treat others?