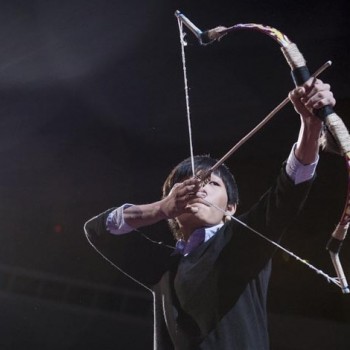 When he was 12, Dong Woo Jang decided to make a traditional Korean bow using only the materials he could find in the woods. He can’t remember why, exactly. Like many children, especially in the Korean educational system, which is famous for its high expectations for achievement, he lived in a stressful world. His parents prohibited video games, which is how so many kids today relax. So he found himself retreating to the wooded areas alongside a highway that ran past his apartment building, and at some point, he got the idea of making his own bow and arrow. (When I he reached this part of his story, in a TED conference speech he gave, he had my full attention: the elements of his life ran parallel to mine. When I was a child, I would wander around the wooded hills near my home in Romania, playing with a wooden sword I had made myself.)

One day he found a particular bough of bamboo and, like a sculptor, saw in its shape the possibility of a bow. He brought it home and, night after night, he bent and carved, bent and polished the wood into exactly the shape he wanted. When he was done, like a true artist, he decided to make another one, and another. His schedule required him to do his searching after school, so he found himself smuggling his tools into school with him, hidden in his backpack—saws, knives, and axes. Once his class work was done, he wandered around, harvesting lengths of mulberry and yew and maple from within a few miles of his home. He ventured farther away from his house to find them and then, back home, in his room he would fashion yet another bow. Since his early days of bow-making, Jang researched Korean history and has found that the designs he thought were his own are actually very similar to his Korean ancestors.

Making bows for Jang has gone from passion to a kind of magic. “You need to communicate with your materials and have harmony with them to make a perfect bow,” he said. “The bow resembles me and I resemble the bow. When I work with the very DNA (in wood) which has existed since the beginning of time,  I feel free travelling back and forth to the ancient world. After fixing, breaking, redesigning, bending, mending and amending, I have combined features between my two favorites, the Turkish and American Indian bow, I have designed my very own. It ends up looking like the traditional Korean bow.”

It’s a wonderful story about how the creative human imagination, if left unstimulated even for just a while, will start to invent its own amusements and instinctively find ways to create something new. It’s a cautionary lesson to our world where both children, and adults, are surfeited with electronic stimuli in ways that both make us better informed and better connected, but also maybe numb us to the sort of creative insights we need to move forward.

Do you have stories from your own life about how you relied on creativity to give your life the same kind of rich texture in the absence of privileges other people took for granted?