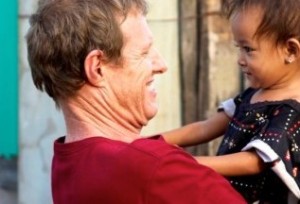 Scott Neeson’s life might have been something it would have taken an F.Scott Fitzgerald to capture. As it turns out, this tycoon’s story is more inspiring. It underscores, for me, how radically a human being can become someone nearly unrecognizable to the people who once knew him. I recently read a brief account of this remarkable individual’s life. Over the past few years, he’s been the subject of accounts in the Huffington Post, as well as through various other media outlets. So none of this is news to the close readers out there.

Yet as I delved a little more deeply into his story this time around, I began to understand more clearly what caused him to give up the life of a Hollywood mogul and move to Cambodia, where he has devoted himself to saving the lives of children in Phnom Penh. It’s the sort of change I believe many people can and should make, in one degree or another, at this point in history, where acts of desperation seem to end in violence rather than the sort of benevolence Neeson has exemplified. This was a desperate man who saw through his crisis toward a life filled with love and generosity. With Neeson personal change represents an upheaval in fundamental values and behaviors: in essence, he’s found a completely new way of relating to one’s own life and the world. And the world should be grateful. We need more of him.

He grew up in an unhappy family in Adelaide, Australia, and dropped out of high school to begin a series of jobs–his first was delivering posters to movie theaters–that led him up the ladder. (It’s a classic American rags-to-riches story that began Down Under.) First he rose into film distribution and then into higher and higher management positions until he was eventually the president of 20th Century Fox. As a marketer of films, the global success of Titanic was his proudest achievement. As a result, he had it all, the playboy lifestyle, a yacht, a jet, a Porsche. Yet he wasn’t happy.

“There is a feeling in America that once you get this new Porsche you will be happier. It’s all lies,” he said, in a video biography about his life on YouTube.

As he grew disenchanted with his own achievements, he began to meditate and practice yoga. At the same time, he decided to move from 20th Century Fox over to Sony Pictures Entertainment. In an extended hiatus between jobs, he decided to fly to Asia and take a tour of Buddhist landmarks in countries like Cambodia. On a walk out into the streets of Phnom Penh, a mob of begging children surrounded him. The level of poverty stunned him. He’s never seen anything like it. On a brief break from this squalor, he began talking with someone at a café about how much he wanted to help all these children. He was told that if he wanted to find the ones who needed it most, he ought to visit a particular garbage dump, called Steung Meanchey.

In the video, his personal memory of the dump is chilling:

“It was the single most impactful moment of my entire life, gazing into the abyss. The smell was almost tactile. There were kids everywhere, working. Going through rubbish looking for recyclables, plastics, metals, for maybe 25 cents per day. The rubbish would include everything from body parts and fetuses to industrial waste and recyclables. You’re face to face with the fact that there’s you and this child of this family who has no back-up plan.”

He returned to his new job at Sony, driven to do something for these children. As much as he wanted to change his life, he was just as careful not to make some kind of radical, misbegotten flight from his disaffection with the status quo. He’d seen friends hit their 50s and go off the rails. He didn’t realize the change in him had already happened. There was no turning back. An acquaintance described how he looked when he got back: “There was a light in his eyes I hadn’t seen before.” When he flew back on a return trip to the garbage dump, preparing to begin an organization to help the children there, his cell phone rang. It was a particular Hollywood star’s agent and the star, both on the phone in a rage because their private jet wasn’t stocked with the right food. The contrast between what he was seeing and what he was hearing was unbearable. The actor on the phone said, “My life wasn’t meant to be this difficult.”

He felt a physical revulsion.

“If I wanted a moment to show me how ludicrous my Hollywood life was, there it was,” Neeson said. He flew home determined to completely change his life. By the end of 2004, he had resigned from Sony and sold nearly all his possessions to raise money to start the Cambodian Children’s Fund. The orphanage began Phnom Penh as a rented building with a single staff member. When he moved back to Cambodia and began working as founder and executive director for the fund, he would get up every day and head to the dump. He was called the Pied Piper by those who knew him, bringing children back to the orphanage after every sortie: “If they were going to get off this garbage dump they had to go to school.”

The organization offers free medical care, and supplemental education for impoverished kids, as well as vocational training for ones in their teens. In its first six months, it doubled in size and in the next four months it doubled in size again. More than a thousand children have followed him to a better future. Back in the States, with help from friends, he’s been able to raise funds from his previous network of acquaintances, and more and more of his time now involves fund-raising to ensure the momentum of growth his organization has generated.

His sister-in-law puts in all into perspective: “We’d been making films about social justice for years. Now he’s actually living this thing.”

When you see Neeson in the video, it’s clear that he feels personally responsible for every single child he accepts into CCF. His friend, the actress Heather Graham, puts it: “He’s like a father to 1,100 children.”

So his story begins as rags-to-riches and continues, even more triumphantly, as riches to rags.

Changing for the better in a radical way doesn’t need to mean changing your entire life. Do you know people like Neeson who have left everything behind for something more meaningful and better? Do you know others who have incorporated crucial volunteer or charitable work into their lives in ways that allow them to stay on track and work “within the system?” The world needs both. Tell us your stories.