The Risk of Being Rational 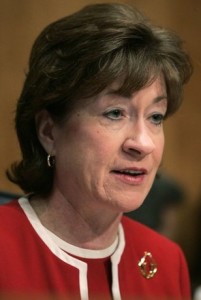 Susan Collins, the Republican Senator from Maine, strikes me as the kind of hero we need right now in Washington. Not simply for her stand on particular issues, but because she’s willing to take a stand unpopular within her party and stick to it. Plus, the fact that her positions represent a path of sanity and moderation and she’s willing to take heat for it. Example: she drafted a $54 million transportation bill sunk by the GOP, spearheaded by Mitch McConnell who justified it as a way of adhering to the Budget Control Act, which mean that Collins was the only Republican to vote yes, along with Democrats.

I do wish more Republicans would have joined her, not simply because the bill makes sense, but because she has an ability to take a stand on principle against self-interest. I’d approve just as much if a Democrat did what she’s doing—against the bill—if that legislator based the vote on principles. For me, what makes action virtuous in a way that we need now is the choice to stand out from the crowd in a vulnerable way—to put one’s own interests at risk for the sake of what’s right. Collins has done this, all along, on the issue of gun control.

As she wrote in Bloomberg BusinessWeek, Maine has one of the highest rates of gun ownership of any state in the union. That makes her stance in support of gun control a risky, admirable position to take. “I knew I might pay a political price for supporting the legislation. My hope is that I can convince people that I’m right—or at least that I took the time to study it. I thought it would be a very difficult for people to vote against the bill once they read it. This was such a reasonable and modest proposal that, ironically, had language in it which the NRA had been seeking for years.”

It’s a commentary on our times when a stance as reasonable and acceptable to all rational gun owners, whose goal isn’t simply to obstruct Congress, could be a risk for someone just as reasonable. We need more legislators like Collins. To be exact, we need 534 more just like her.