The candidate of your dreams . . . 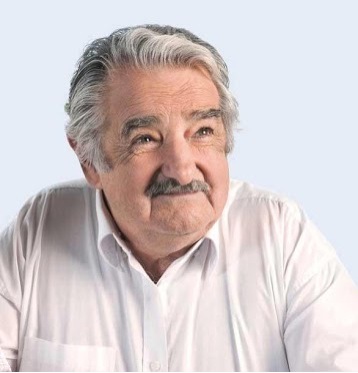 If you’re less than inspired by  politicians in the United States, you simply need to look a little further south to feel more inspired. Uruguay’s seemingly incorruptible president has been called the world’s poorest and most generous leader. Jose Mujica offers the world a model for leadership through his  character as a statesman and a human being. When he isn’t running his nation, he retreats to his farm and his garden, where he and his wife cultivate flowers as their only source of income outside his government salary. He drives an old Volkswagen Beetle. That beater is the only large item the man owns, other than his home. And the home actually doesn’t belong to him: the name of his wife, Lucia Topolansky, is listed on the title to the farmhouse where he lives in Montevideo. And here’s the most astonishing thing. He makes $12,000 per month and keeps only $1,250 for himself, donating the rest to charity. His wife also donates a significant part of her salary to charity.

He told El Mundo, the Spanish newspaper, “I do fine with that amount; I have to do fine because there are many Uruguayans who live with much less.”

His life sounds as if it were dreamed up by a Hollywood screenwriter. He began his career as a guerrilla fighter He was imprisoned at in the 70s and escaped, and was shot six times by police while he was being recaptured, and then spent 14 years in behind bars as a political prisoner. For two of those years in prison, he was forced to live at the bottom of a well. When democracy was restored to Uruguay in 1985, he was freed under an amnesty law. This man’s story struck me as so remarkable when I first learned of it, I feared it was a hoax and searched thoroughly for confirmation of its details on the Web, where it’s clear his personal story hasn’t been explored except on a few sites, including Wikipedia. The New York Times has reported extensively on his career as a political leader in Uruguay, but not on his personal character and generosity. And my acquaintences in foreign relations say, indeed, Mujica is the real deal.

The South American country ranks as the second least corrupt country in Latin America in Transparency International’s global corruption index. In fact, the country is so upright in the way it operates that American and European firms seek it out as a place to establish outsourcing and offshore operations.

Mujica’s charm and informal style have endeared him to the population, especially among rural and poor sectors. His personality and his devotion to a non-material life would seem to be the earmarks of a man with religious devotion but he says he does not believe in God. He stands, for me, in marked contrast to the people who dominate our American political scene, where we rarely see anyone who isn’t a millionaire run for office. Money has become the lingua franca of political life, driving campaigns, shaping Congressional activities, and generally warping whatever happens in Washington, D.C. on both sides of the political aisle.