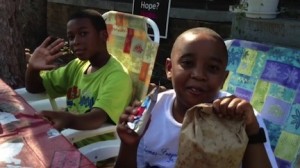 Last year a 9-year-old Detroit boy did his part to help pull his home town out of its slump.  He handed over a check to the city for $2,832.64, which he’d made by selling lemonade. I don’t know what tickles me more about this story: the fact that the benefactor was only nine; the Mayberry RFD method for making money; or the remarkable fact that someone can be this so generous at such a young age.

So on June 8, Joshua is going to be a guest of honor at Lemonade Day Detroit, a program that teaches children how to own and operate a business by doing just that with a lemonade stand.

And it was only the first installment. He plans to give the city even more money. His lemonade actually raised $3,600 in profit, according to Matt Helms, of the Detroit Free Press, and the remainder of the funds were to be wired to the city electronically.  The boy had expected to make little more than a thousand dollars, yet as word about his project spread, it attracted people from all over the metro region: Navy sailors, Wolverines from UM, surburban grandmothers, all of them becoming spokespeople for the cause.

His mother put it into perspective: “It’s not really been about the money. It’s been about his spirit being contagious and allowing people to know that we all can do something to change where we are. It’s bigger than just making money for the city. It’s about changing hearts and minds.”

“The problem I saw was that we were closing out of business (as a city),” Joshua said, “and I wanted to do something before we didn’t exist anymore. The idea came up from a book. It was about these kids who were raising money for their school to buy computers.”

Even the mayor got behind the effort. Dave Bing called the boy at his home to thank him but generously suggested Joshua put the money into his own college fund instead.  Joshua’s parents stepped in at that point, telling Bing that they were already on track to have enough money saved for tuition when he turns 18. His parents said the money—he earned it with the help of his friend Dwayne Durant by selling lemonade, water, fruit punch and popcorn—was raised only for the city.

As it turned out, other kids will benefit from the money, which Detroit designated for upkeep in parks and recreation. Joshua hoped he could designate that the money would be invested in a playground and park near his own home on the city’s west stride.

“You can help people no matter what, and you can be nice to people even though you don’t even know them,” Joshua said.

When Joshua was given the Spirit of Detroit award for his efforts, Detroit councilwoman JoAnn Watson called Joshua a superstar and a “wonderful young man.” I couldn’t agree more.