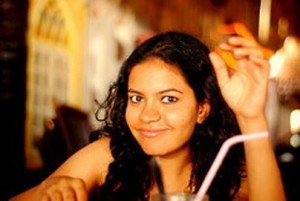 According to Indian legend, Lord Rama and his army of helpers were building a stone causeway out into the ocean. Where it was leading exactly, I’m not sure. But while this massive infrastructure project was progressing, some of his army chieftains spotted a squirrel scooting out onto the rocks and then back to land, each time depositing a little pebble into the cracks between the larger rocks.  Pothole repair, more or less. Where’s this squirrel come from? He was a volunteer. Nobody had recruited him. He saw something worth building and just picked up a pebble.

The lesson here is about the immense value of small-scale participation, and this may be precisely what saves India’s massive population of homeless children.

At least that’s picture a speaker at Tedx in Nagpur built around this myth, to illuminate her mission in life.  Gloria Benny, the founder of MAD (Making A Difference), the fastest-growing volunteer organization in the country, used this story to express the idea at the heart of her efforts. She wants to summon the squirrel in all of us, and so far, she’s doing a pretty good job of it.

Here’s how she laid it out. India is a country with 1.2 billion people. It also has its own One Percent—at the opposite end of the economic spectrum than the one known by that term in the U.S. This One Percent is populated entirely by homeless children: 12 million of them.

Benny wants to suggest a way to save these kids: participation.

“There is a solution,” Benny says. “Let’s assume 360 million people are in the middle class. That means 360 million people are in a position to solve this problem. All we need are 2.4 million of them to come forward and take care of five children each. If we need only a fraction of the population to come forward, why isn’t this problem solved already?”

Well, for one thing, people are busy.  Second, they don’t recognize the problem. Third, they don’t immediately see a way to tackle it in their own lives. Yet Benny recognized a model for stirring commitment from the habit-bound, comparatively comfortable middle class. She glimpsed the solution in the story of Gandhi’s triumph.

“What we need is a participatory model. A model which gives everyone an opportunity to contribute, a chance to make a difference. Have we not done this before? Yes, we’ve done it before and done it well. Over the past 80 years, India’s greatest achievement was its struggle for freedom. We mobilized a million people to fight against colonialism and fight against the biggest military power in the world. What was it about Gandhi’s approach that inspired so many people to back him up? What he asked for did not require men and women to throw out their other priorities, but simply to join a non-violent movement and otherwise lead normal lives,” she says. “To stand up for what you believe in, that was all.”

As she puts it, he “cracked the code” and discovered how to encourage large-scale participation.  He started with small groups and used them to build outward toward larger groups of participants. It’s what Benny has done with MAD.

“It’s very simple. Five years ago, a bunch of us teenagers, bored with life, realized there was a cause close to our heart. The state of children at risk. We formed a group. We adopted a model where we could continue with our normal priorities and keep our social commitments. What started with 20 volunteers and 60 children in one city rapidly grew and is now 1,200 volunteers and 3,000 plus children in 19 cities. MAD’s exponential growth points us to the same fact: people are waiting for a platform, a model, where they can contribute in any way they can. You can glimpse a sample of these remarkable young people here. Do you have two hours per week to spend as a mentor in your city? Pick some children to help. Do you have four hours? Then be a city-level leader. Do you have 8 hours per day? Then join full-time and be a national leader. Do you have no time at all? Then join at $200 per month.”

In other words, she says, “Quit taking the rear seat. Take charge and be change agents, like Rama, but most importantly like that little squirrel. “

Make A Difference (MAD), started in 2006  and it identifies high-potential young people who are recruited as volunteers to teach children in orphanages and street shelters. The children under MAD’s tutelage learn from the Cambridge English for Schools curriculum.

Only 13% of high schools in India use English as a medium of instruction, yet a child’s higher education and future job prospects depend heavily on speaking English—colonialism survives in at least this one respect. Access to the Cambridge curriculum will put children on a par with those educated in good schools.

So, by the time a child passes through MAD’s course, he can speak in English and make career choices just like his English board school-going counterparts.  A child from a regular home has the privilege of experience and guidance in the form of teachers and parents. This project was started so that a child under MAD would have the same experiences and knowledge of a more privileged child, with the help of visits to hotels, factories, professional colleges as well as enriching experiences such as camps, arts and crafts workshop.

It isn’t hard to see how this model of incremental participation could be applied to any social issue, in India, or in the U.S., or anywhere else.  It’s built on a sliding scale of participation: give only what you’re able to give. But no matter what it amounts to, DO something. She quotes Martin Luther King, Jr., as a way of summarizing what MAD asks of its members:  “If you can’t fly then run. If you can’t run, then walk. If you can’t walk, then crawl. But whatever you do you have to keep moving forward.”

Can you see how this could be applied in your own community, or neighborhood, or your own life? Can you think of examples of how this sort of participatory model has worked in your own town?