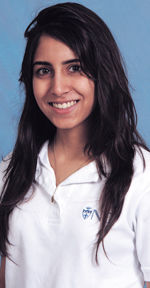 At 21, Sejal Hathi still has the voice of a teenager, but she’s as articulate and confident as a seasoned entrepreneur — which is exactly what she is. When she was only 15, she founded Girls Helping Girls, as a pen pal organization linking teenage girls in the San Francisco Bay area, where she grew up, with a similar group in Jaipur, India. It took off in directions she didn’t anticipate and became a high-profile organization for empowering young women through knowledge-sharing, morale-building and networking. Her timing was serendipitous. Others were preparing to start similar organizations and took note of her success: Nicholas Kristof’s Half the Sky Movement as well as similar groups organized by the Nike Foundation and the World Bank. Because of her age she drew attention from the media, and word about Girls Helping Girls spread around the globe. As a high school freshman, she saw the need to connect teenage girls around the globe and answered that need before anyone else.

“Our youth aided us significantly. The novelty of young girls starting an organization to assist other young girls around the world inspired a lot of people: donors wanted to join the cause because of it being by girls and for girls. Third, there was nothing like it at the time. We became the go-to hub for girls around the world who were interested in this cause,” she said in a phone conversation. “We built a program guide, a coaching guide and we became more systematic and structured. It started as a pen pal program and evolved into an organization that offered structured after-school activities with adult allies.”

While working at Stanford University toward both an M.D. and an MBA this past year, she also managed to organize and promote  Girl Tank as a crowd-funding vehicle for young female entrepreneurs. Her work with Girls Helping Girls alerted her to the difficulties young women around the world have had raising capital for fledgling organizations. Girl Tank will connect them with a variety of sources — incubators, grassroots investment funds and individual donors.

“I started it in my sophomore year of college, with an older woman. We realized there was a lack of growth capital for young women who need it to scale nascent ventures into something they could do full time. The premise and vision for Girl Tank is to serve as a support network for fledgling female entrepreneurs around the world. We saw them wasting time trying to raise money every couple months when they could have been focused on growing their business.”

A double major for two advanced degrees at Stanford would represent a full plate for most young women, but not Hathi. She says she inherited her drive to excel from her parents, who immigrated to America from East Africa (a generation earlier, her grandparents left India for opportunities in Tanzania and Uganda.) Her mother and father worked to put themselves through college, and her father is now an engineer for a Silicon Valley firm, while her mother is an attorney who specializes in immigration. As a child of immigrants, Hathi was eligible for a Soros Fellowship and was awarded a grant to pay for her schooling at Stanford in the spring. The Paul and Daisy Soros Fellowship singles out exceptional immigrant students who have the ability and desire to handle an advanced education. It chooses those who show the most promise of becoming leaders who will give back to their communities and their nation. The candidates also had to demonstrate an understanding and respect for the principles and values of this unique nation: freedom and individual rights.

“I was raised in the shadow of my parent’s experience, influenced by their journey, though I was able to savor the fruits of a traditional American upbringing.”

When she’s done with her graduate work, Hathi sees a number of possibilities: She might found an online medical record system in the Bay area, or start a global health services company.

When we asked her if she ever feels overwhelmed, her cheerful response: “Most of the time.” She either runs or does yoga for an hour each day, “very early in the morning or very late in the evening,” she laughs. Yet her ambitions have spawned their own emotional safety net. The exceptional women she has brought together around the globe offer a sisterhood of emotional support. They’re always available to listen to her and encourage her. “That’s my bastion of support when I’m down or need help. I have a network of people united by a single impulse to make the world a better place.”