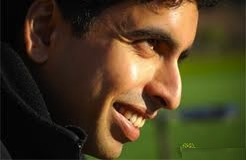 Salman Khan is a classic outlier who has given the world what many consider to be a great gift. It all started out with a YouTube upload. This hedge fund manager decided to use YouTube as a way of sending his cousins a little instructional video on math. The cousins were pleased. So was the rest of the world, apparently. His little homework aid became an Internet meme and exploded into a global sensation. And it was all pretty much by accident. It succeeded partly because of the intelligence and good will and generosity it embodied.

In 2004, Khan began making his YouTube videos of basic math instruction as an alternative to sending his cousins the videos directly. (Anyone who has tried to upload a huge file knows how you need to find a workaround, with limits imposed on email attachments.) His discovery? His cousins preferred videos to the genuine article: they were quite happy to use the videos rather than have him teach them in person.

“They were saying they preferred the automated version of their cousin to their actual cousin,” he told his audience at a TED conference in 2011. “If they have to review something that they should have learned a couple of weeks ago or maybe a couple of years ago, they don’t have to be embarrassed and ask their cousin. They can just watch the videos. If they’re bored they can go ahead. They can watch it at their own time at their own pace.”

They liked how they could control the communication. It was similar to the preference some people have for email over phone calls. A phone call intrudes. An email beckons.

Other family members discovered the videos. Then strangers from around the world began to discover and use them. It became something of a movement. All because Khan did something helpful for free.

Wired.com reported that eventually Khan got a letter from the parent of a 12-year-old autistic boy who had experienced a lot of difficulty grasping math. “We have tried everything, viewed everything, bought everything,” the parent wrote. “We stumbled on your video that’s on decimals and it got through. Then we went on to dreaded fractions. Again he got it. We could not believe it. He is so excited.”

In the article, Khan said: “Here I was an analyst at a hedge fund, it was very strange for me to do something of social value.” Teachers discovered and started using the videos.  Eventually Khan quit his job and established the Khan Academy, a non-profit organization to build on what he was doing in the videos. It now offers 2,000 videos on math, science and economics and allows students to learn at their own pace.

Where in your own life have you found a way to give help to others and realized it was as rewarding, or more rewarding, than the work you do every day to survive? Studies have shown that giving makes you happier than keeping. Doing something for others, rather than yourself, will offer you a great sense of well-being. Have you found this to be true in your own life?