Pre-School for the Poor

In Bronx Center for Science and Math 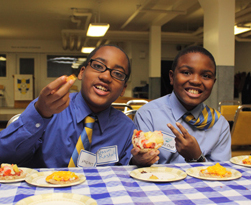 For more than a decade, a wonderful experiment in providing a world-class education for the poor and underprivileged–mostly Latino and African-American students–has been turning out successful students in Durham, North Carolina. The school selects based on income, not race: all students must quality for the federal meal program. The school’s impact is small, but significant–and its mission is wildly broader and larger than what students get from existing public schools. The Durham Nativity School, a non-sectarian faith-based middle school–a sort of pre-prep school for the disadvantaged–sends a graduating class of exceptional ninth graders on to prep school and college every year by devoting itself to these students over the course of nearly a dozen years.

I write about innovative approaches to education occasionally here, because education is part of the crucial foundation for an economic turnaround in this country. We need a steady stream of new ideas in a world where products and services more and more rapidly become commoditized. Creativity can’t thrive without world-class education, so I’m delighted when I see innovative ways to teach. I’ve written about John Simmons and his Strategic Learning Initiatives program, as well as Ed Tom’s Bronx Center for Science and Math. Both have shown astonishing results and were founded by visionary individuals. The same is true for the Durham Nativity School, founded by Joseph and Ann Carole Moylan. He was an emergency room surgeon who saw the toll of violence on young minorities and wanted to do something to prevent it.

As reported in Raleigh’s News & Observer, Moylan came to know one of his son’s track teammates who had risen through the school system based on his athletic skills, to the detriment of his schooling. He had become a star high-school athlete who didn’t know how to read, and was unable to get into college. As a result, he turned to gang life, which led to his murder: a victim of the violence inflicted on so many young men Moylan himself had treated as an emergency room surgeon.

Moylan responsed by founding a school to disarm violent youth by giving them hope. He based his school on a network of 64 schools across 27 states: the Nativity Miguel Network of Schools. Though that organization ceased operating in 2012, Durham Nativity perseveres.

It’s a comparatively tiny organization. Founded a little more than a decade ago, the tuition-free school accepts only 15 new students each year, with a total enrollment of 45 students in sixth, seventh and eighth grades. At that size, the quality and quantity of attention each student gets is dramatically more intense and enduring compared to what they would get at a traditional middle school. The intensity of attention from Durham resembles something from South Korea, where education occupies most of a student’s waking hours. Students at Durham put in long days: 7:45 a.m. until 6 p.m., with time for the required tutoring, sports and compulsory community service. The school designs its curriculum to conform to federal and state standards, yet it offers training not just in math, science and reading, but in how to live a responsible and rewarding life.

Funded completely from private donations and corporate foundation grants, Durham Nativity commits itself to a student’s future over the course of eleven years, helping its students, once they move beyond middle school, with tuition assistance at a preparatory high school, and a counselor from Nativity continues to meet with the student and monitor progress through college. In other words, this middle school becomes a surrogate parent to each student.

What’s interesting to me about Durham Nativity is that, in a time when Common Core has become an embattled campaign to fast-track our educational system toward excellence, this small, quiet school offers a different approach. It elevates the commitment of one individual human being to another as the foundation for lasting results and academic excellence. Franchising this model into a nationwide system would be an enormous task, but seems to me that the results of this real life “experiment” demands that we pay attention. The real tragedy of America’s educational system is that both our overall results are so grossly unsatisfactory (our kids rank below average among developing nations) while a good number of schools can thrive using different approaches to education. Demographics are not a determinant of failure. How we teach our children is. And yet because of denial, arrogance. politics, even a lack of understanding by state and local school boards, most of our children across the nation have no access to best practices that are proven to work. It’s a self-inflicted tragedy.