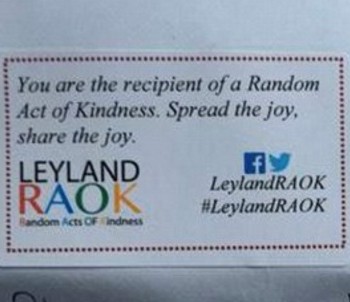 News reports that Harper Lee is going to finally publish another novel were a pleasant surprise, though I wonder if the new story will have room for her most interesting character–Boo Radley–the mysterious recluse who turns out to be a guardian angel in To Kill a Mockingbird. He was one of fiction’s most remarkable embodiments of goodness who had a habit for leaving small gifts in the knothole of a tree for the novel’s two youthful protagonists. I was reminded of Boo while reading of an anonymous mother of two who did as he did, hiding gifts for strangers around Lancashire, England. She has left unused scratch cards on supermarket shelves. She has paid for other peoples’ orders in restaurants. She even set up Facebook and Twitter accounts and you can follow here at #LeylandRAOL. Atop her Twitter feed she has a saying from Aesop: “No act of kindness, no matter how small, is ever wasted.”

In a brief story about her, The Daily Mail quotes her as leaving a note with an envelope containing money to pay for a coffee for anyone to find outside a cafe: “I want to remain anonymous. I’m not interesting in any glory; I just hope people enjoy it and it inspires others.”

On a parking meter she left another envelope: “I’d like to pay for 2 hours of parking for you. ”

After she attached the gift, she stood back and watched to see how people would react. One woman went up and inspected the meter, looking at the envelope, without opening it.

On a supermarket shelf, she left an envelope with her logo on the outside as as well as the inscription: “You are the recipient of a Random Act of Kindness. Spread the joy.” Below, she had written in pen: “Open me. Inside this envelope is a scratchcard. Hope you win big.”

Apparently, The Daily Mail tracked her down effectively enough to have a conversation with her. She told their reporter about that scratch card, “We felt very conspicuous doing it. In the supermarket I made sure I had a bit of shopping with me and that no one else was down the aisle, but it felt strange getting things out.”

She said that she plans to do this indefinitely, hiding a few small gifts every week for people to find randomly, like Easter eggs. She felt that the hardest part wasn’t the personal expense of all the gifts, but simply coming up with original ideas for new ones. What she wants is to inspire others to do the same, paying forward this spirit of generosity, until it becomes a movement. After she left money to pay for a meal outside a café in Lancashire’s Buckshaw Village, the person who found the envelope and used it gave the café manager enough money to pay for someone else’s meal. The café manager, in turn, decided to donate the money to a children’s hospice rather than take it in as revenue. Yet another Englishman was inspired a few days ago to leave a letter and a five-pound note to a young mother on a train, after being touched by the way she was parenting her child. Fifty-year-old Ken Saunders wrote a note to the mother, Samantha Welch, saying, “Have a drink on me. You are a credit to your generation — polite & teaching the little boy good manners. PS, I have a daughter your age. Someone did the same for her once. I hope when she has children she is as good a mother as you!”

As he got off the train, he handed Welch the note with a bit of money inside and was gone before she could read it. Afterward, he went to the trouble to track him down with a Facebook post and then an appearance on local television in order to thank him. The Daily Mail and the Telegraph both published a photograph of the three of them beaming with pleasure at the reunion.

These stories could have come out of the movie, Pay It Forward, in which a schoolboy does essentially what these people are doing, and starts a national movement in the process. It was a great idea then, and an even better idea now that it’s happening in the world. Think of how many ways you could do something just like these British disciples of Aesop who practice small acts of kindness. In a time when so many people are still struggling with unemployment and debt, even seemingly inconsequential gives of money–or larger than usual tips–can change that person’s outlook on life. Next week is Random Act of Kindness Week, but apparently it’s getting an early start overseas. Maybe kindness is catching: let’s hope it spreads everywhere.