Pakistani Malala is an American hero 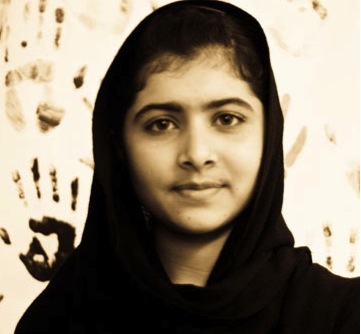 In her heart, Malala Yousufzai is an American. She is your neighbor, your sister, your daughter, your grand-daughter. She is not only courageous, but she has become, for me, the embodiment of what the United States stands for, our values, our ideals and the goodness inherent in our system. She’s a beacon of freedom in a world of oppression.

So the best news I’ve heard in a long time are the words “she’s improving, but she’s unconscious.” That was the latest prognosis on Malala Yousafzai, a 14-year-old campaigner for human rights, who was shot in the head by Taliban militants on Tuesday. Miraculously, the bullet only grazed Malala’s brain and it’s likely she will survive. It’s horrific to be talking in these terms about a 14-year-old girl this way, someone targeted for assassination in Pakistan simply because she wanted to tell the truth. I find it enormously inspiring how Pakistanis are rallying around the girl and against the Taliban. Vigils for her are being held in schools and mosques across the nation—which we consider a threat because of its nuclear capability and for the way it provides a haven for the Taliban. Pakistan itself is not our enemy. Neither is Islam. In fact, Pakistanis are with us when it comes to Malala. As a friend of Malala’s family told Nicholas Kristof, the New York Times columnist: “Please thank all your people who are supporting us and who stand with us in this war,” he added. “You energize us.”  And Interior Minister Rehman Malik said: “Malala is our pride. She became an icon for the country.” These reactions are another indication that the war against terrorism is not a war against Islam, or any other religious creed, nor even any particular nation, but a fight against a morally blind extremism which infects its followers with a pathological indifference to human life.

Malala is a marvel, a standard-bearer for human rights and freedom, as well as the enlightened values we hold dear in the West. She is goodness personified. She was already, at her young age, advocating to improve education for girls in her country. With an entrepreneurial spirit, she’d even started a fund for her cause. A Times Op-Ed contributor says that she posted her diary on the BBC’s Web site, exposing the Taliban’s atrocities against women, its excesses, and its obscurantist approach to interpretation of Islamic laws. Last year, she was nominated for the International Children’s Peace Prize by the advocacy group Kids Rights Foundation. If she fully recovers, she’s going to be someone to watch, a woman who will make a difference in the world. She’s already made her quiet mark on history.

As Kristof has put it: “Pakistan is a country that has historically suffered from timid and ineffectual leadership, unwilling to stand up to militants. Instead, true leadership emerged from a courageous 14-year-old girl.”