In pace of life 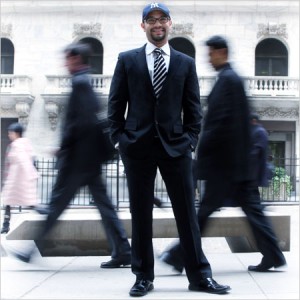 In a previous post, I offered part of a recent conversation I had with novelist Sanjay Sanghooe about Wall Street, where he once worked for a major hedge fund. He shared some of his thoughts on good vs. evil in the financial world, and in the larger world of American business. Here are some more of his insightful observations about are current economic predicament.

The people who run these companies are well informed, they look at what’s happening in society at large, at how income is distributed, and you would think on the simple basis of consumer demand, the gross inequality of income inhibits spending and buying. You would think it would cross their minds that if I raised wages, that alone would stimulate the economy. There would be more money in the hands of people who would spend it. But they don’t think this way.

The reason for that is we worship greed. That’s pretty much it. I’m coming to this conclusion reluctantly. I see it in my friends, in people I know, and at large.  We have become a culture of greed and short-term gratification. Everyone wants everything today. They want it now. They really are not looking long-term. So we aren’t looking long-term as a society. It permeates to leaders and the CEOs. If nobody else cares about tomorrow, why should we be the ones to take that stand. The CEO of Whole Foods has created this notion of conscious capitalism.  I wrote a piece about conscious capitalism. I got an email from an organization that had copyrighted the term Conscious Capitalism, a very nice email saying we loved  your article, but just so you are aware of it, this is a trademarked term, and we don’t mind your using it but you have to use the trademark symbol. I’m thinking, doesn’t this defeat to the whole point of Conscious Capitalism?

So Whole Foods is trying to practice it. Prices are a little higher but Whole Foods tends to sell a higher quality food. So there is a way to set a balance. Whole Foods stock price is going up, they are doing well. There is a case to be made that if you adopt a long-term strategy you might pay for it in the short-term but you will eventually see an increase in profitability coming out of that. These bits of light are still small. Most companies look at it and will say this is an oddity. It’s charming that a company can do this, but they respond to their own shareholders. The ordinary shareholder, the mom and pop shareholder, looks at it, and this might better serve them down the road, but most of these shareholders are not looking that far. They say this company made this great deal. My stock went up twenty percent in value, and they are happy. They feel rich today and that’s more important than actually being rich tomorrow.

That mentality is part of the problem of why we’re in the position we’re in now. Part of our problem is that we’ve lost the ability to generate new jobs. I wonder if this mentality is based on what’s in the back of everyone’s minds. People see the risk of collapse in the future and they want to get as much value out of what’s here now before things fall apart.

They are thinking of their own welfare and own survival. Thinking long-term just doesn’t fit into that.

Since we’ve become a consumer economy, going back decades, that’s just there. It’s how everything works. You want people to spend now rather than save and invest. It’s all so inter-related.

This is inevitable if you look back thirty or forty years a lot of people even back then would have said this is where we’re headed. The pace of things has simply been accelerated with the technology boom. The reason the Internet accelerated everything was that the instantaneous spread of information sped up the process of deal making, it ratcheted it up to a tremendously high level, which put pressure on companies to reform business at a rate they never had to before and to produce results at a rate they never had to before. Whatever you had done was already old. Also, the Internet created a real sense of A.D.D. in our society. Too much information overload which came onto people all of a sudden. At first it was subliminal and then it all exploded. Nothing was satisfying anymore because there was so much more of it around the corner. People’s attention span got shorter and shorter. We focused on getting a quick hit out of something. You see it in media. It has change so dramatically since the advent of the Internet. It started with cable. With the Internet, everything is old within five minutes.

It’s interesting how you link up the Internet to this economic disease we’re suffering.

You see it around you but I also see it in my own behavior patterns. Not just coming out of the sense of A.D.D. but also out of the sense of pressure. If everyone is functioning in one way, it’s very hard to go the other way. We are a very individualistic society but we’re also a society of sheep. There are trends and we follow those trends. That tends to drive a lot of my decision making. I would love to make long-term decisions about my life, but I can’t afford to. I have immediate pressures to respond to, because everyone else is functioning that way. You don’t even have a chance to sit down and think ‘I want to slow this down. I’m not going to make a decision that will impact me negatively in the future. My work colleagues won’t accept it.’ Even with my writing. I’ve experimented with my writing and I’m sort of responding sometimes to my audience. If I don’t tailor my work to my audience I find I don’t have an audience.

Sanjay and I talked about other things as well, but I felt this last insight of his was especially prescient. We need to synthesize data, trends, bit and bytes of data into a much bigger picture. As Sanjay points out, we’re losing ourselves in the day-to-day and quarter-to-quarter. We’re indeed becoming A.D.D. Couple that with a capitalism driven to self-entitled greed maximization and it’s a recipe for disaster. His admonition does more than explain our culture. His synthesis points to how we need to change.  It will be hard.