No One Eats Lunch Alone Here 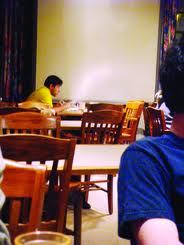 In honor of Thanksgiving, which is, in some respects, about feeling thankful to be able to share a meal with loved ones, I want to reprise this post from early this year:

In Season of Life: A Football Star, a Boy, a Journey to Manhood, Jeffrey Marx recounts an amazing story about how the football team at Gilman High School in Maryland were trained to ask themselves one question constantly: What can I do for others?

One of branches of this philosophy was the imperative that no Gilman football player allow any other boy at the school, team player or not, each lunch alone.

At the opening of the football season, all the incoming eighty players exchanged a highly unconventional call-and-response between team and coaches. Their coach, Biff Poggi, was no Vince Lombardi. The chant wasn’t about winning. “What is our job?” he would ask them, on behalf of himself and his staff.

“To love us!” they’d yell back. (These were players from all four graduating years at the school, so the upperclassmen already knew the drill.)

“And what is your job?” Poggi asked.

“To love each other!”

Their coach would be sitting on the grass as he spoke, not standing up, pacing, exhorting them. He’d tell them he didn’t care how big they were, nor how experienced—they might never have held a football before—nor whether they would surprise or disappoint him. He’d say, “If you’re here, then you’re one of us, and we love you. It’s as simple as that. One way we measure greatness is the impact you make on other people’s lives.”

He told them to be inclusive, not elite. Anyone who has ever attended high school knows what it means to have a letter on the jacket, how much status and sex appeal go along with being a starter on the team. It’s the surest way of singling yourself out as a winner, a leader, a popular figure in the halls and at the parties. But Poggi wanted them to see their role in exactly the opposite terms. He told them that once they got out of high school the world would rank them along endless measures, separating the sheep from the goats, the wheat from the chaff, the rich from the poor, and so on. He told them there would be plenty of time for them to distinguish themselves as better or more important than the rest of their fellow human beings. But they weren’t going to do that at Gilman High.

They were not to allow anyone go off at lunch and eat alone. If they saw someone eating alone, they were to sit down and make him feel appreciated. They were to live with integrity. They were to seek justice. The outcome? No matter what they’re stats on the football field, their record in life would be an undefeated one. In these days of increased questioning about integrity in sports—how athletes like Lance Armstrong deceive themselves and everyone else in their pursuit of glory—this is exactly the kind of sanity we need in amateur sports. If there is such a thing as amateur sports anymore, with the way gifted athletes are tracked from high school through college for lucrative careers as professionals. What coach Poggi was doing needs to be done in other organizational groups, not simply in sports teams: businesses could learn to teach their employees the same lessons about not simply doing a good and profitable job, but to see the privilege of being employed as a chance to help others as well.

Are there ways you could, or have, applied Poggi’s philosophy of “what can I do for others?” in your work or in your involvement with any group or organization? If you were an athlete, did you have a coach who stressed the important of values and integrity as much as the goal of winning? On Thanksgiving, who could you invite to your table who has never shared a meal with you before?