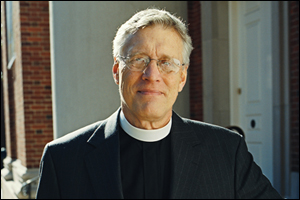 Last year, my lunch with Michael Lindvall, turned out to be a remarkable encounter. Lindvall is pastor of Brick Presbyterian Church, our family’s church in New York City. He was thrilled to share with me a recent sermon I had not heard in person. As a marketing professional, I would have special interest in this one, he thought, and he was right. But the way he built his refreshing sermon around such a time-worn phrase — new and improved — surprised and delighted me.

He starts off dwelling for a bit on a story from the Old Testament. The Persians destroyed Solomon’s temple, and decades passed before the Jewish people decided to rebuild the magnificent structure. The prophet Haggai wrote: “The splendor of this (new) house shall be greater than the former.” Apparently it was, because it endured through five centuries until it was torn down and rebuilt by King Herod. Lindvall asks what it means to think of a temple as new and improved, exactly. In what way will the new temple be better than what went before? It will continue to serve a house of worship’s four primary purposes: worship, fellowship, learning, and mission. The Jewish faith remained the same, no matter where the tribe itself chose to worship.

Lindvall believes that Christianity itself has some room for renewal and improvement: it can become better by simplifying itself into what it was always meant to be. He sees the need for change in the fact that fewer and fewer people identify themselves as formally religious. They aren’t going to church, basically. “The churches of Europe are by and large empty, museums rather than living faith communities. Here at home, a fifth of Americans” belongs to no religious congregation. “Most American denominations–liberal and conservative alike–are recording net losses.” To reverse this trend, Lindvall suggests something literally radical: that Christianity should return to its roots in compassion and faith rather than doctrine. Brick Presbyterian Church itself is growing, maybe partly because it’s doing that: hewing to the “same old things” of worship, mission, learning and fellowship, but in “new and improved” ways. To join Brick Church, people are simply asked, “Do you believe in Jesus Christ as your Savior?” No doctrinal hurdles, no qualifications beyond that simple faith. “This is to say, all, all who would put their trust in Jesus Christ… as invited to journey with us in the church regardless, of nothing, absolutely nothing else.”

New and improved in this context means, for Lindvall, a deeper and wider faith. One that embraces and invites more people into a congregation. In closing, he told a story that illustrated the consequences of that kind of receptivity to new members. Eight years ago, Lindvall had interviewed a candidate for a vacancy at the church, a conservative evangelical. In passing, Lindvall mentioned that gays were welcome at Brick. If you share the faith, you’re in. The next day, the candidate notified the committee he wanted to be withdrawn from consideration. It was obvious what had alienated him. Yet, not long after my lunch with him, Lindvall got a letter from that same man, along with a book he had written: An Evangelical Case for Same-Sex Relations. He was still an evangelical conservative, but now he belonged to a new and improved one: deeper and wider church. It’s possible the tolerance he’d encountered at Brick set him on a path that led to this wonderful change of heart.

As Lindvall said: “The full inclusion of gay men and women is but one instance of the wider church I am talking about. I look for a “big tent” church that welcomes widely – welcomes liberals and conservatives, embraces old and young, a church that has a place at the table for rich and poor, the well-dressed and the ill-dressed, the spiritually mature and the spiritual young, White and Black, east and west, a church for old New York and just-moved-to-town, a church for silk-stockings and no stockings. I imagine a wider church where all, all who would put their trust in Him, are welcome to the feast.”

I find this tremendously inspiring, and as close to a perfect mission statement for a Christian church as any I’ve ever seen. If you attend religious services, is your congregation as open to diversity as Brick Church? Has it changed in ways that enable it to offer a path that’s deeper and wider to the people it invites through its doors?