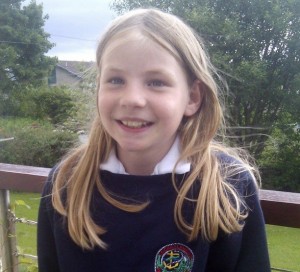 Almost three years ago, a nine-year old girl in Scotland told her father she wanted to be a journalist. She didn’t want to wait. So her father suggested a blog about her school lunches. Together they figured out how to set one up, and called it Never Seconds, because someone had already claimed Oliver Twist’s “More Please.”

Her father suggested a Latin pen name: Veritas Ex Gusto. She preferred a humble, Anglo-Saxon moniker: Veg. One blunt syllable. So, with permission from teachers, Martha Payne started taking photographs of school lunches at Lochgilphead primary school, a two-hour drive west from Glasgow. She posted them, with ratings on how good, or bad, they were, and reviewed the meals in simple terms: “I would have preferred more than one croquette.” Alongside her stark shots of measly portions of frequently fried, often processed-looking food, she ranked them on a number of different gradients. Some were so precise they were funny, such as “pieces of hair” and “number of mouthfuls.” (Her blog could have been called Never Hair, since the food on her prison-style tray was generally hair-free.) The response was astonishing. Within a week her site had drawn more than 100,000 visitors, as school kids from around the world began sending her photographs of their own institutional meals. She posted them as well. It became a kind of crowd-sourced watchdog group to improve school nutrition standards. She argued, correctly, that improved nutrition would sharpen minds and improve health.

When her posts were getting 50,000 views per day–she decided to partner with her grandfather, who supported a program in Africa called Mary’s Meals. The charity was founded in 2002 by Magnus MacFarlane-Barrow, who lives near Martha in Argyll, Scotland. As of last year, it was feeding more than 600,000 children in 16 countries, including Malawi, Liberia, Kenya and Haiti. The reasoning was simple: offer meals to poor children in Malawi in exchange for their attendance in school. Result: healthier and smarter kids in places where they are needed most. She began to promote the program and donations came in: only £2,000, but enough money to feed 300 African kids for an entire year.

It seemed this shy, blue-eyed girl had become, almost simultaneously, an Internet sensation, a philanthropist, and an investigative journalist. Encouraged by the response, she doggedly kept documenting the nutrition her school was doling out to students . . . until it became a threat to the people who ran the school. It wasn’t her fault, actually.

The local paper published a photograph to show little Martha standing beside a cook who was sautéing something over flames with the headline: “Time to Fire the Dinner Ladies.” That awkward pun changed everything. Martha was told to shut down her blog. The school was feeling too much heat. She wrote a regretful farewell post.

The international response was swift and overwhelming. Thousands of protesting emails swamped her father’s inbox. The media from around Britain and elsewhere overwhelmed the telephone switchboard where her mother worked attempting to interview her. The school backed down; the blog went back up. Donations increased by a factor of 100. People were outraged that she wouldn’t be able to raise enough money for Mary’s Meals to build a new kitchen in Malawi, which was her goal: she wanted to get to £7,000. After she started posting again, donations soared to £130,000.

Though her blog is languishing now, it has drawn an astonishing 10 million visitors. She and her father published a book last year, Never Seconds, telling the story of her journey. Each copy sold will provide 25 school dinners in Malawi.

Anything this soft-spoken little girl does next will be fascinating, though maybe she just wants to be a schoolgirl again for a while. Her story is immensely encouraging and inspiring, and yet if you watch her on Vimeo, you’ll see a little girl so stricken with stage fright that she buries her face in her father’s arm and lets him read her speech for her.

It’s touching to see the power of this child’s honesty and initiative coupled with the genuine vulnerability of a child her age. The goodness within her drove her to overcome the limitations of her role as a kid in a remote town, and, in her own way, she changed a small part of the world, with incalculable results. It’s hard not to choke up when you see her father look down at her, mid-way through the talk, to say, off microphone, “I’m just so proud.”