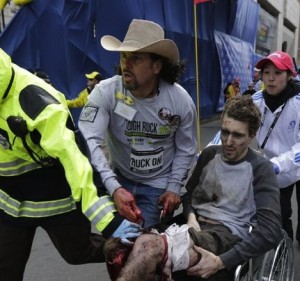 This little passage has been making its way around Facebook for a few days. I like it because it points out how the attack in Boston revealed more good than bad. The evil was limited to two misguided individuals, while the good emerged instantly in the actions of countless others.

“Put him on trial, but don’t cover it. Tell me when you decide to jail him for three lifetimes – because that number matters. That’s the number of lives he has to now pay for. That’s all I want to know about him. Nothing else.

jacket, or the neon police vest, or even the ones in the regular everyday t-shirt who became a helper. Tell me the story about the first responder who held gauze over a wound until they made it to the hospital. Tell me the story about the volunteer who held the hand of the injured spectator until they got into the ambulance. In six months, tell me the story of those who lost a limb, who beat the odds, pulled through countless surgeries, and are learning to walk again. Tell me the story about the love, the compassion, and the never-ending support of thousands, millions, of people who support the victims here. Tell me their stories. Tell me everything you can, because they are the ones that matter. Tell me of the good that they have done, are doing, and will continue to do, regardless of… No, not regardless of, in spite of. In spite of that someone who would do them harm. Because that’s what freedom in this country means. It means coming together in the hardest of times, even in the face of unfathomable adversity, to make life better for all those around us.

“Tell me the good stories. That’s all I want to hear.”