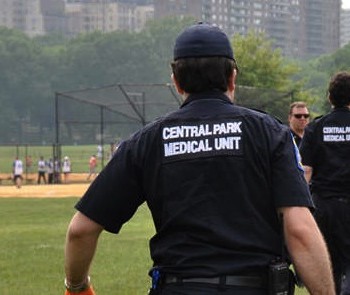 If you’re injured or otherwise need emergency medical care in Central Park, you’ll get it within three minutes. And it will be an ambulance unit staffed entirely by expert volunteers. The Central Park Emergency Unit was recently featured by CBS in a report that celebrated its 150 volunteers who have become a crack medical response team with three fully equipped ambulances, a fleet of bicycles, and an ATV. They not only protect Central Park and surrounding streets, but assisted during the 1993 World Trade Center bombing, the Sept. 11 attack on the Trade Center, the American Airlines Flight 587 crash and the 2003 North American blackout, as well as Hurricane Sandy.

Three minutes. It’s the lowest response time of any ambulance team in the state of New York. This gains significance when you consider that the CPEU was formed in 1975 when response times dragged on as 90 minutes. That’s a critical, life-saving difference for someone having a heart attack. These certified EMTs respond to 3,000 calls a year. Do the math and you realize that’s an average of nearly 10 calls every day. And they do all this for free. Ordinarily, that quantity and quality of service would cost taxpayers more than $2.5 million.

Volunteers come from all walks of life. Eugene Thomas manages an apartment building close by the park. Gabriel Tischian is a pre-med student at Columbia University. “It’s the perfect boot camp for a career in trauma medicine,” he says. “It’s hands-on.” Volunteer Steve Peluso told CBS he sees everything imaginable: “A lot of bicycle-runner collisions. People fall off rock faces. It’s a very rewarding experience.”

The volunteer group hopes to raise needed money and increase the public’s awareness of what it is and how it works. Some of the equipment needs replacing and ongoing costs are always a challenge. One ambulance is near the end of its road-worthiness. Even so, the group never bills a single patient for any service.

“When somebody calls 911,” Levow said, “they are having the worst moment of their life and we’re the people that step in and make that at least a little bit better.”