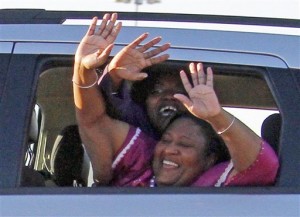 Until not too long ago, Jamie and Gladys Scott were serving double consecutive life sentences for having stolen $11. The two young women have never ceased professing their innocence of the crime. Yes, life in prison over the amount it takes to buy a few frozen dinners. When I read about their plight, I immediately wanted to speak with them and what I found both outraged and inspired me. The evil of their arrest and conviction reminded me of what had happened to me and my family in Romania, during my childhood–unjust seizure, imprisonment, and forced labor. Last year, they were finally released from prison, in what was ostensibly an act of mercy–Gladys needed to donate a kidney to Jamie, whose kidneys were both failing. But their liberation was actually a long-delayed act of justice. Even so, they are still on strict parole, and they live in fear of being arrested for the slightest infraction and being tossed back into prison.
I wanted to learn more about why these two women had suffered so unfairly, how they’d endured their nightmare, and what lies in store for them in the future. It took many tries but I finally got through to their attorney, Chockwe Lumumba. I told him I wanted to give them a chance to tell our readers about the horror of their story. He immediately arranged for a conference call with Jamie and Gladys. At the start of the call, I asked their attorney to describe what had actually happened the day the Scotts were arrested.

He said Jamie and Gladys, 19 and 22, had gone to buy some butane gas and were on their way home in Forest, Mississippi, when their car broke down. Another vehicle pulled up with two men inside. They were acquainted with the men, because they worked at a chicken processing plant where Gladys held a job, so they paid the men $10 for a ride home. Both men had been drinking and one began to make sexual advances toward Jamie. As she was struggling with him, the car pulled to a stop, and the women got out and started to walk away. This is when three men in a second car pulled over and got out. These three, Christopher, Gregory and Howard Patrick, robbed the men who had given the Scott sisters a ride. At this point, no one alleged that Jamie and Gladys actually took money from anyone. The accusations that the sisters collaborated to lure their companions into a trap arose only after police began to negotiate over charges with the Patrick brothers. (Later Christopher signed an affidavit recanting his accusations. Other people, as well, signed similar statements saying that the two other brothers had confessed to lying about the Scott sisters.)

I wondered why. This struck me as the heart of the injustice.

The sentence, though it seemed just as evil as before, was now at least partly comprehensible. It was, in part, a way of getting even with the Scott clan.

Later, one of the young men recanted on this original statement and said that the men were trying only to get a lesser prison sentence for themselves by accusing the Scotts of the robbery. The Scotts were finally released after 16 years only because numerous people took up their cause. A full pardon still eludes them.

The background on that pardon is, possibly, even more outrageous. As calls for a pardon became more and more vociferous over the years, Gov. Haley Barbour dragged his feet on the request–while setting free far more hardened criminals, in decisions that puzzled many observers. Bob Herbert listed them in one of his New York Times columns: they included four convicted killers. None of the cases involved improper arrests or convictions: all of these criminals had simply enrolled in a program in which they accepted various jobs around the governor’s mansion. The reality of what happened here is so grotesque, it’s almost comical. One of these men had shot his girlfriend in the head while she slept, yet he was released for having served the governor faithfully as a household worker.

I asked Jamie to describe her horrific experience, and she talked about it in halting terms, at first, until she began to speak of the inner strength that allowed her to survive it.

“It was just unreal. I used to say when you go to prison, you belong in prison. But never in a million years would I have thought I would be there for a crime I didn’t commit. I would think, this can’t happen in the United States. This is not real. A lot of days I felt the truth would come out. But there was one part of me that just didn’t care. There were times, several times, I tried to take my life. I just didn’t want to keep living an inhuman life. A lot of people think they know what prison is about. They have no knowledge whatsoever. None.”

I said, “Help me understand.”

“There is absolutely no rehabilitation. They curse you. They belittle you. You live on a level lower than animals. I lived in a unit where it was 116 women with six shower heads. Rows and rows of spiders where I lived. Bugs in your bed. There were bugs in the food. The building was so old, it would be raining inside the building. You had to wade through sewage to get to the bathroom. When my health started failing, I started passing out. There were people passing out with no health problems because it was so hot. It mentally destroys you.”

I asked if there was a turning point when they began to feel stronger, if they had a source of inner strength?

Jamie said, “I got to the point where I didn’t want to die there. The only belief and faith I had was in God. Then I realized our case was growing all around the world, people in foreign countries were on our side and all.”

“But after a point you believed that something good could happen?”

“Yes. Every day,” Gladys said, finally joining in. “You get stronger and stronger. It’s scary, though, because we’re on parole and if we even breathe wrong we go back to prison. For a crime we didn’t commit.”

The evil of their fate, the malignancy of the charges and the sentences, is so stark, I wondered if the sisters could see any good in what had happened. To my surprise, they responded with a heartfelt yes.

Gladys said, “If it weren’t for the nation coming together, me and Jamie would still be in prison.”

Lumumba explained in detail how it started with a few written words from prison: “The mother kept talking to people about it. Then Jamie wrote a kind of narrative about what happened in the case. It wound up in the hands of this paralegal named Nancy Lockhart, and then Nancy took up the cause with the mother and they reached many people. It took off when someone came up with the phrase, Life sentences for $11. It really began to resonate with people on a national and international level with that phrase.”

I aksed where the strength to endure those years came from.

“God is what kept us alive,” Gladys said. “It it weren’t for prayer and faith . . . even when we wanted to give up, He was always there. And He’s still there.”

I asked them if they harbor any hatred for the people who did all of this to them.

“Well, at first I was angry,” Gladys said. “But then, you know, the same way the Lord forgave me for the things I have done in my past, so I had to forgive them. I don’t hold animosity against them, you know. If I can help them, I help them. And I hope that one day I can see them and tell them that I forgave them for telling their lie.”

The story isn’t over though. The sisters were released partly because Jamie’s kidney is failing and Gladys wants to donate one of her own kidneys to her sister. Medicaid will pay for the costs of Jamie’s surgery but won’t pay for the surgery to obtain the kidney from Gladys. They simply can’t afford to do it yet. And they are struggling to fit back into society, having been in prison for so long. Gladys went back to school, earned her GED, and is studying to be a paralegal. Recently, finally, she got a job, but Jamie is too ill and weak to be employable. And they worry that the smallest violation of the law, such as a traffic ticket, might send them back to prison.

“The fight is not over,” Jamie said. “We may have won the battle, but the war is still going on. Because you know, it’s hard for Gladys and me to get a job and, you know, we’re trying to live a normal life but it’s hard. It’s hard.”

Lumumba explained: “They can’t be put in jail for no reason. They have to have a reason. But that’s a very scary position for them to be in because it’s no real clarity on how severe the reason has to be. Now, most people don’t go back to prison for violation of a traffic ticket, but it’s scary for people like them with their history.”

Jamie said, “What’s important … the most important thing to me on this case is, you know, if the charges get back in court, we can get our name cleared when we can go on with our life. And I know that’s not impossible because . . . I know it in my heart, they will come forward and they will give Mr. Lumumba what he needs to be able to file for a new trial, at least present new evidence.”

This is a long, harrowing and yet inspiring tale. For those of us still on the sidelines, the way forward seems perfectly clear. People need to stand up and keep supporting these sisters in their continuing struggle, as they did when they were fighting for justice from behind bars. Should we be willing to add our names to the list of people who want justice to be complete for these two women?