The Last Shall Be First 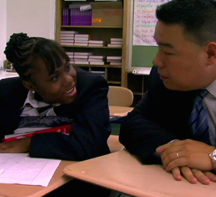 Back in the 90s, when he was just out of school, Ed Tom worked as an associate buyer for Saks Fifth Avenue. Now he runs one of the most innovative high schools in the country, sending his unlikely South Bronx graduates on their way to Dartmouth, Penn, and Bryn Mawr. The son of Chinese immigrants with a grade-school education, his is an amazing story of innovative organizational skill, insight into human motivation, and, he’s quick to point out — his faith. Without imposing his beliefs on others, he’s found a way to quietly put his Christianity to work as principal of the Bronx Center for Science and Mathematics. He’s turning some of the least privileged kids in the nation into Ivy Leaguers.

After five years of buying for a retail organization catering to wealthy Manhattanites, he realized he preferred teaching the ninth graders who came to Sunday school at his church. “My wife challenged me to give teaching a shot. I went down to the department of education with my transcripts, and the woman who interviewed me asked what I could teach. I said, ‘Look at me, I’m Asian. I can always teach math. Nobody will think I’m wrong.’ It got him a laugh, and a job, once she looked at his experience.

For his first year, he taught at Norman Thomas High School, and then, at the Manhattan Center for Science and Mathematics in Harlem he created a student club — devoted to peer tutoring. He lugged two couches from home, put down carpets, played house and hip hop on the radio, and brewed coffee: his version of a little Starbucks, except everything was free. He treated club members to outings: Broadway shows, ice skating, whatever they thought up. The club had a president and a social chair and essentially ran itself. It attracted cheerleaders, athletes, the popular kids — and the rest followed.

He gave it allure, and it took off. “Some were there for remediation, and others just went because it was cool,” Ed said. “I created a whole marketing campaign. We had t-shirts with our slogan: It’s cool to be smart.”

One day, unannounced, the chancellor of the entire New York City school district showed up at his door one day to see the source of the school’s double-digit gains in math scores. He asked Ed to pitch his program to the top thirty math mavens in the school district. True to his marketing background, Ed did it with Powerpoints, “like an RFP.” The chancellor loved it and asked him to present to the city’s superintendents. At that meeting, Ed Tom got five job offers. One position led to another. He became regional instruction supervisor for 32 high schools in the Bronx whose math scores were near the bottom. In only two years, their math scores rose to near the top in rankings of city schools. Ed was able to write his own ticket, so he created the Bronx Center for Science and Mathematics, an entirely new school within the system — dedicated to city’s least advantaged kids.

“The beauty of our model is that we’re in the poorest Congressional district in the nation and 93 percent of our students are black or Hispanic and 92 percent are at the poverty line. These kids can learn when they’re surrounded by love and opportunities. These kids have never been told they will amount to anything.”

“It’s less about academic preparedness: it’s more about grit and determination. It’s about somebody like Mitch Kurz teaching how to assimilate into society. And his class on personal finance. We have 450 kids fully enrolled. We graduate about 100 every year. 2009 was our first class. So we’ve graduated five classes, 500 kids. Every year we get 3000 applicants. That’s a 3.6 percent acceptance. Stanford, Princeton, Harvard, Yale have a higher acceptance rate.”

Ed says his faith is what drives his success. It’s what motivates him to make the world better, every hour of the day — in his job. He’s dedicated to his students as individual human beings, not as statistics or scores, and most of all, not as career stepping stones. He makes sure his students know how much he cares about them.

“I’ve thought of doubling the size of the school, but that would jeopardize the model. We personalize attention to our kids. If we had a thousand kids we wouldn’t be able to do it with the same level of care. I’ve looked parents in the face, and I’ve asked them to trust me with their children. I have a bigger calling. This is my life’s work. This is what I felt from the days I taught Sunday school: I felt I was put here by God to teach teens.”

In a way he’s found the secret to getting things done in any field: to forget about oneself and focus exclusively on the task at hand. “If you put yourself first, you’ll find it hard to be successful. You have to put the kids first.”

The real lesson I learned from talking to Ed is about how someone can act on his faith, without needing to call attention to it. And Buddha, Confucius and Mohammad would all approve of Ed’s Christianity. Devoting oneself to others in at the heart of all the world’s major faiths. If we are devoted to a higher purpose, love and compassion become the whole point and our goals become more important than what we get in return for them. The key is to put faith like Ed’s to work in our families, neighborhoods, communities, and organizations. Ed’s my hero.