In disaster, the mothers step up 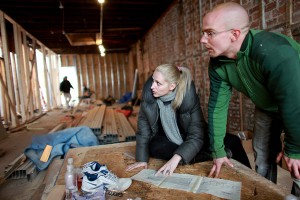 Mothers, as it turns out, are useful in natural disasters. That’s from a recent New York Times column by Ginia Bellafante, about how the aftermath of Hurricane Sandy has transformed a small band of New York mothers into, more or less, suburban angels of mercy. The stories she tells are remarkable: “Most of them (are) stay-at-home mothers unaffiliated with one another, who have found a calling in volunteer work for the victims of Hurricane Sandy.” These women have plunged into the ongoing relief efforts with such devotion that, in some cases, their families have had to plead for attention. The undercurrent of the story is that existing agencies and institutions have failed to deliver the help these victims require—a story not being trumpeted in the media much. The hurricane hit the East Coast in late October of last year, and many families are still adrift in its wake—four months later.

“The purest embodiment of the type,” writes Bellafante, “is perhaps a woman named Jill Cornell, a brownstone Brooklyn mother . . . whose most recent accomplishment was winning a pie-eating contest at the Windsor Terrace farmer’s market.” After the storm, he became obsessed with helping the victims, mucking out houses in Queens, cleaning sewage from grout in bathrooms with a toothbrush because it was all she had available for the job. In the process she lost six pounds. She worked six days a week until Christmas and then reduced her schedule to five days. She mostly brings food to those who need it from workers at Occupy Sandy.

Another mother, Jess Woods, from Bedford-Stuyvesant, Brooklyn, has spent 16 hours a day in the Rockaways. Her husband rebelled, and she has concentrated her efforts to one day per week. Another woman, Leni Calas, literally adopted a displaced family and brought them home to Astoria, Queens.

“It’s become abundantly clear how broken our system is,” Calas said. “What I am seeing are all the things I could have been doing for years.”

This sort of immediate, almost unthinking response, is exactly how what’s good in human nature operates. It’s almost an unconscious reflex, but, as in this case, it often takes an extremity, close to home, to awaken this higher instinct. Do you have stories, from your own life, or about people you know, who have responded as selflessly in an emergency? Have you see how such a response can change that person from that point on?