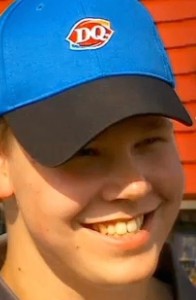 I keep coming back to the old, familiar adage that character is measured by what you do when no one else is looking. A couple incidents earlier this year underscored that little proverb for me and lifted my heart. In both cases, an individual did the right thing, in situations where he could have gotten away with something wrong — and, in one case, gained in a big way. No one would have known otherwise.

Without looking for any recognition or reward, Joey Prusak, a 19-year-old Dairy Queen manager did the right thing for the blind customer, when he could have looked the other way. The customer was unaware of having dropped a $20 bill while fumbling for money to pay for some ice cream. A woman behind him spotted the money, picked it up, and put it into her purse. Once the younger blind man was served, she stepped up to order and Joey told her, “I saw what you did. That money belongs to him. Give it back, and then I’ll serve you.” Instead she acted on the assumption that possession is nine-tenths of the law — it was hers now. She made a scene, as if somehow she was the offended party and then left. Joey could have stopped at that point and gone on with his work, but instead, he walked over to the blind man and handed him $20 out of his own pocket. “Sir, on behalf of myself and Dairy Queen, I would like to give you $20 to replace the one you dropped. I know it isn’t the same $20, because that woman stole it, but it’s worth just as much.” The young man thanked him, and Joey said it was “no big deal.”

All the while one of the regular customers had been watching and listening and later he sent a note to Dairy Queen praising Joey for his generosity. The staff at Dairy Queen printed the note and put it up around the office. Someone posted it on Reddit, the news sharing website, and soon people were sending Joey checks for $20. He said that it was nice of people to recognize him, but he would pass all the money along to charity. Warren Buffett heard the story, and called Joey to thank him for what he’d done. (Buffett’s Berkshire Hathaway has a majority stake in Dairy Queen, but I think Buffet was simply moved by the young man’s integrity.) On the phone, Buffett told Joey he had a “good heart and did a good deed.” Joey, in recounting the story, said, “And then he started crying.” Buffett ended the call by inviting Joey to Berkshire’s next shareholder meeting.

In another recent incident, a homeless man found a backpack full of cash at a shopping mall — and, instead of keeping it, turned it over to police. None of the reports describe what went into this decision, but could it have been an easy choice when the backpack that Glen James surrendered to police contained $42,000? (The police found its owner and returned all the money to him.) A Virginia man heard this story and set up a fund to help Glen James “change his life.” In only a few weeks after the incident, people who heard about the man’s honesty had donated a total of $68,000 to the fund, according to the New York Post. This wasn’t the outcome of a few rich donors: these were modest gifts from nearly 3,000 people. No one sent in a “patron level” gift, as it were. They were common people who simply responded to the goodness in what James had done. Many of them wrote notes of praise, one of which stands out for me: “Such a beautiful person. Reduced me to tears. We have a lot to learn from you.”

I couldn’t have said it better. After decades in business, I know enough by now to give credit in The Constant Choice to so many other people for the successes I’ve enjoyed in my life. A lot of what I do now is driven by the need to give something back to a society that has given so much to me. To see the honesty and generosity of people like this young worker, whose wages can’t be much above the minimum, and a homeless man who has nothing — it’s a reminder that I still have a way to climb before I get to their level, no matter how much I do for others.