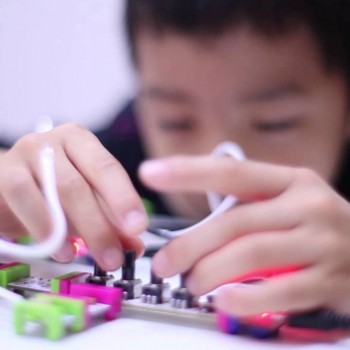 Remember how great Lincoln Logs and Erector sets were? It was one of the best gifts to unwrap at Christmas. They still are after half a century; you can buy them because they’re such perfect ways to fuel a child’s imagination. A shout-out for Legos is in order as well. Doesn’t everyone agree that the best toys have always been the ones that turn you into an inventor, a designer, a builder, and an innovator. They draw upon the core trait of the human mind, before it is taught to simply obey and behave and memorize: a craving to imagine and make something new. Something marvelous takes that tradition in toys to a whole new level for all ages. It’s based on the same principle as its predecessors — modularity of simple interchangeable components offers a breeding ground for the trial and error of invention and creativity. There’s a driving principle behind all this. It’s called fun.

Its latest incarnation is called LittleBits, and you can buy a starter kit on Amazon for $99. From that single, basic kit of interlocking parts, you can create almost half a million different objects, some useful and some maybe not so much. But that’s precisely the path toward innovation, seeing what works and what doesn’t. This little kit focuses a playful mind into an inventive one, which is exactly what our economy needs right now: the opportunity for Everyman and Everywoman to become an innovator. This marvelous kit offers anyone that power. It’s essentially a Lego version of electronics, with powered modules that link together with magnets.

It’s the brainchild of Ayah Bdeir, a Montreal-born graduate of the MIT Media Lab and the American University of Beirut. She’s both an artist and an engineer. She says, “With electronics if you wanted to build a robot you had to be an electronics engineer. You had to know how to wire and solder. That makes the field not as innovative as it could be. We have 60 bits right now. That makes for billions of combinations you can make for light, sound, pulsing all the way to very complex wireless connectivity. It offers very simple and very complex behavior. The very first question we ask ourselves is, is it fun? That’s more important than is it educational? We empower kids but also adults to make things that move and change and have programmed behavior that opens up a frontier where you can discover. Teachers, designer, engineers, and hackers all offer ideas for littleBits.” As she told The Verge, “There are literally tens of millions of possible circuits you could create. From a small number of blocks, you get a whole universe of possibilities.”

She started the company in 2011 and has since raised about $15 million in venture capital. Here’s what’s most interesting about where Bdeir is taking her company: it recently introduced the “cloudBit.” This is a breakthrough that allows DIY inventors an off-the-shelf ability to link their littleBits devices to the Internet. It makes them part of the “Internet of things.” That’s a term, basically, for how your refrigerator might at some point become as smart as your phone. If you can link things to the Internet, all sorts of intelligence can come into play in the way it works — same for your microwave, your lawn mower (which might just do the job itself at some point) and any other functioning device in your home or business. Now, anything you build with littleBits can be connected to “the cloud” and, basically, begin emulating the intelligence of your iPhone.

Why does all this matter? Because it’s yet another way of democratizing yet another area of activity formerly reserved for a privileged few. With the Internet itself, a universe of knowledge becomes accessible to anyone. With distance learning, a college education can be earned in your bedroom. With Uber, anyone with a car can start earning a living. With 3D printing, manufacturing moves into your kitchen or home office. With the building blocks Ayah Bdeir is creating, the Next Big Thing in electronics may very well spring from the mind of someone with a day job at McDonalds. Her battle cry is pretty clear: “The next billion-dollar idea isn’t going to come from Apple. It’s going to come from designers and artists and parents.”

It’s hard to see that happening with something as seemingly elementary as the current littleBits starter kits, but on the other hand, why not? A crude prototype isn’t a finished product: but it’s the basis for a patent. And the more of those we can source from the crowd, the better off we’ll be as a culture and an economy. We desperately need people like Bdeir as well as the thousands of others her innovation will inevitably turn into inventors as well.