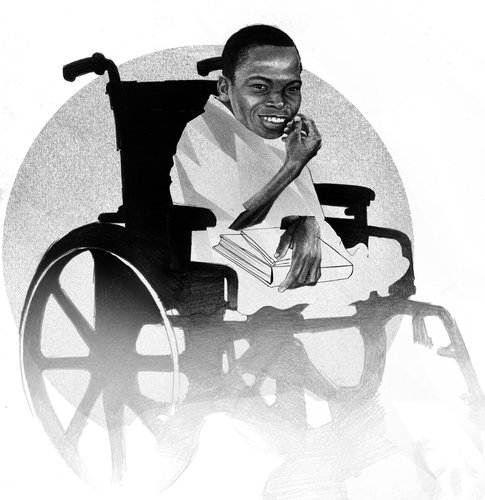 A boy in Africa has the disease Samuel Jackson had in Unbreakable. His bones snap at the slightest impact. His mother has to carry him four hours to the nearest clinic for treatment. They slap her for mistreating her boy. He lives in genuine poverty, but with cheerful pluck he goes to school and works hard at his studies. He dreams of America the way an ant dreams of being king, he says. Along comes an American journalist, Elinor Burkett, who hears this boy, by the name of Energy Maburutse, playing marimba, along with his friends Goodwell and Honest. She’s so moved by his beaming face that she connects him and his two fellow musicians with the United States Achievers Program, which gets scholarships for boys like Energy from American universities. It works. End of story: Energy and Goodwell and Honest come to America and begin college. Is this a fairy tale? A movie? (With those names, they sound like characters out of John Bunyan.) Actually it’s a wonderful story of one American woman’s diligence and tenacity with no motive other than to help a fellow human being. It’s also a story of my own life—reminding me of the countless people who saved me from forced labor as a child in Romania and enabled me to come to America more than half a century ago. When Energy got here, he said, “I can’t stop smiling. I’m free.” I remember that feeling. And I haven’t stopped smiling.

As wonderful as it is to focus on his happiness, the real story is in the devotion of his guardian angel, Burkett. As Frank Bruni wrote a year ago in the New York Times, “Burkett lobbied each school for as much aid as possible. She hit up friends, strangers and foundations for the additional thousands necessary for the boys’ living expenses, a process she’ll repeat until all three have diplomas.”

I love Bruni’s conclusion: “People are generous when faced with concrete situations, rather than abstract causes.”

Have you found yourself diving into an effort to help another particular human being, when for years you were immune to pleas for donations to one cause or another? Your time and effort arguably cost you more than merely writing a check, and yet you find that putting yourself at someone else’s disposal is more rewarding that simply offering money to a worthy venture. Can you tell us how you or a friend of yours have become impassioned on behalf of another person who needs help?