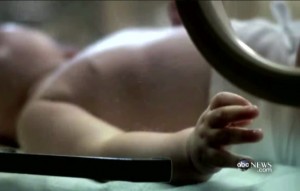 Hurricane Sandy has brought out the hero in thousands of volunteers who responded by putting themselves at the service of those in need, day after day—many of whom are still without power even now.  Early on, in the crisis, a small group of devoted nurses at Langone Medical Center quickly became a symbol of human goodness in the face of adversity. My friend, Polly McTaggart called my attention to a recent ABC segment on these nurses, and it’s inspiring. When lower Manhattan lost power, seven NYU nurses acting fast to preserve the lives of these infants who need intense care simply to keep breathing. Their dedication and love became an early symbol of the care that thousands of volunteers brought to NYC residents in need after the storm. These nurses, while moving the fragile human beings down a set of stairs, to get them out of the blacked-out hospital, had to keep them breathing manually and used monitors strung around their necks to keep an eye on vital signs as they measured each downward step, trying not to injure the infants.

“I was not taking my eyes off that baby, nor that tube,” one of the nurses said.

As the ABC report put it: “If often takes the worst to bring out the very best in people.  The heroes of Hurricane Sandy are out in full force.”

What have you done to help the victims? What can you still do?