Compassion for the uncompassionate 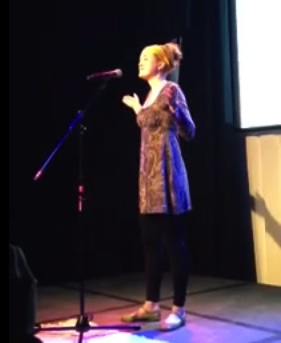 In this video, a gay poet named Molly recites a poem addressed to the conservative parents of the woman she loves. She says, “Catholic, conservative, Republican, living in Tennessee, but the toughest part: they’re wonderful people. They taught their children to organize their lives around faith and service. They raised the daughter than I love. ” What’s so remarkable is the love and tolerance this poet shows for people who may not believe they can tolerate the way she feels about their daughter.  The performance works on many levels. It raises your sense of empathy for the gay poet and her predicament, sensitizing you to her situation when faced with conservative family members who might not approve of her sexual orientation, though they clearly love their daughter, gay or not. What distinguishes her vision is how she has turned around what you would expect to be a plea for empathy—for her plight—and asked her listener to empathize with the fear and intolerance of the people who might disapprove of her. She’s inspiring compassion by offering compassion to those who might be seen as persecutors. She’s proving that she’s the actual Christian in this drama, regardless of her church-going habits. Her message: “If you can’t let go of a political Catholic teaching, it’s OK, because I’ll learn to love you from far away.” “I’m not gay, I’m Molly.”