Compassion for a kitten 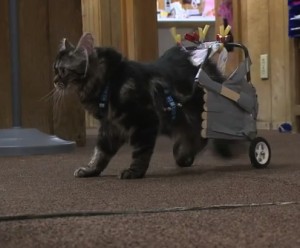 Flipper the kitten was born with a twisted spine nine months ago, leaving her hind legs so badly crooked that she could only drag them behind her. When you see video of her in that state, it’s heart-rending, like a scene from a movie where the gunshot victim pulls himself across a room with his arms. Her hind legs aren’t paralyzed. They’re twisted to the side, because of the deformation of her spine, so that when she’s walking with the front legs erect, her hind ones are kind of paddling the air, aimed sideways.

As The Week writes:

With no quality of life, she was slated to be put down until a group of high school students learned about her plight. The Blitz Robotic Club of Conifer High School, Colo., designed an ingenious wheeled harness to help Flipper walk.

“I love cats. I love building things. So the two things come together and that’s great,” one of the students on the team told a Fox reporter.

The high school fabrication team worked with several designs and finally settled on the most effective one, which looks a lot like a walker for a human being with balance issues. It also works like a horse-racing sulky, if the horse’s hind legs were riding in it. The wheeled chariot is strapped to the kittens neck and chest with a harness, with her legs dangling inside the wheeled truss, and she’s off. She can actually run now, while getting accustomed to having her hind legs in the right position for getting around without the walker. From The Week:

Against all odds, the kitten is on the mend — and no longer at risk of termination. “There’s been significant improvement,” said veterinarian H.C. Gurney. “And that supposedly doesn’t happen.”

There’s even hope that with months of rehab, using the wheeled prosthesis, she may actually learn how to compensate for the spinal deformity and walk normally. Flipper gets to use the cart about two hours a day and her handlers keep a close eye on her. She likes to move fast and sometimes fails to hit the apex of her turns, sliding into a wall. In other words, that high school robotics club has made a cat very happy.