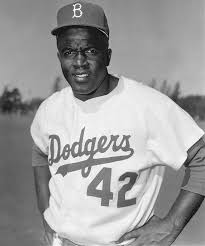 I still have the photograph of my brother and me shaking hands with Pee Wee Reese and Jackie Robinson. As I look at it, my mind goes back to a balmy evening in April of 1954. I was 15 years old and my father proudly brought his two sons to the first baseball game of our lives. It was the opening home game for the Dodgers at their famed Ebbets Field in Brooklyn.

It also happened to be only days since my brother and I were released from captivity in Romania. The media were eager to capture images of the Georgescu boys reunited with their family and safely on American soil, as I describe in my book The Constant Choice. For a couple of weeks the cameras would follow these two young boys around the city of New York, exploring our introduction to a new way of life, away from the hard labor camp where we had been incarcerated by the Romania Communist regime. That evening would become a life-long memory. My older brother would throw the first ball of the season to the famous catcher, Roy Campanella. And I . . . well I would become a fanatic Brooklyn Dodger fan and cherish forever meeting my soon-to-be idols. It all came back to me when I watched a video recently of Carl Erskine giving a commencement speech about Jackie Robinson and their coach for the Dodgers. Erskine pitched for the team from 1948 through 1959, and set a World Series record with 14 strikeouts — and also pitched two no-hitters in his baseball years. His speech wasn’t really about baseball though. It was about being good and making a difference.

When he signed with his team, the world was utterly segregated. “America was a different place. Restrooms were marked colored and white. Drinking fountains were separate. Signs in restaurants would say ‘we have the right to refuse service to anyone.’ That meant, if you were black, stay out.'”

Yet, in this environment, the Brooklyn Dodgers manager, Branch Rickey, decided he was going to defy everyone, break the code of segregation and recruit the best black player he could find. He sent fifty scouts all over the world, and he singled out one player: Jackie Robinson. When Robinson arrived, Branch sat him down and asked him if he was ready for the abuse he was going to face. “You’ll hear rough stuff from the dugouts,” he said. “Profanity, slurs.” Rickey took off his coat and started walking around the office. “Son, ask yourself this question. Are you strong enough not to fight?” (Rickey was echoing Gandhi and foreshadowing Martin Luther King, Jr.) Robinson answered, “I can do it. I can do it.”

At this point, Rickey pulled a book from his desk drawer and began to read from it: “You’ve heard it said an eye for an eye, a tooth for a tooth. But I say to you that you resist no evil. Whoever shall smite thee on the right cheek, turn to him the other one also.” This baseball manager was, indeed, working from the same page as those paragons of non-violent resistance.

Rickey kept going, “We have answers to violence. Revenge, flight or turn the other cheek. The first is barbarous. The man who takes flight invites pursuit. The third breaks the chain. Your adversary is ready for anything other than this. Every man has respect for courage in others, especially moral courage. Only he who has conquered himself can conquer his enemies.”

“I watched Jackie. He was exciting. He did everything possible on the field excellently. He was a superstar. People in the stands began to say why should we deny this guy a chance for the Big Leagues? That was ten years before Martin Luther King came onto the scene. Jackie made people change their minds.”

In 1949, the Dodgers played in Atlanta against the Braves. The Klan picketed their hotel because we had a black man on the team. Jackie got a threatening letter. Take the field, and you’ll be shot. Someone on the team said, “Let’s all wear number 42. They won’t know who to shoot at.” Aside from being a fine, friendly joke, it was also a touching act of support and solidarity. They played. No one fired a shot.

I’ve given enough speeches to know that this tale alone would have gotten a standing ovation for Erskine, but he went on and suddenly the speech got even more personal. He described how, in 1960, his wife gave birth to their son, Jimmy, who had Down’s Syndrome. He knew what it would mean, that their son would face the sort of prejudice from other children than Robinson had faced. As tribal human beings we hate other groups who are like us, as human beings, but unlike us in a way that’s impossible to ignore:

Jimmy was born into a world that wasn’t any more ready for him than it had been ready for Jackie. I went home and set my other three kids down and told them about their new kid brother. I said this little guy will need a lot of help. He won’t be fast, he wont’ ride a bike, won’t swim. You kids will have to help hm. It was the best speech I ever made.

His children embraced their little brother. Erskine’s sons and daughter all played sports and brought their teammates home to meet Jimmy. “My kids were fantastic. They made the neighborhood kids feel comfortable with Jimmy.” The Erskine family changed the way their entire neighborhood felt and behaved, because they were devoted to making a difference for their little brother. He was a handful. When he didn’t like something he would make a guttural sound deep in his throat. Erskine taught him again and again not to make that sound, but to say “No thank you.” No matter how many times he asked for Jimmy to say “No thank you” the child would listen but would never say the words. So there was one particular house where a dog was kept all day long, barking much of the time, and Jimmie would sneak out of the house to visit that dog — and once was able to break into the home, to pet the dog, setting off the burglar alarm in the process. The police brought him home. This happened several times. Finally, Betty Erskine said, “you would spank him.” So Erskine took Jimmy upstairs and put him into position for a spanking and Jimmy looked over his shoulder at his father and said, “No thank you.” At that point, Erskine realized that Jimmy was just as smart as the other kids in the neighborhood, but he was “wired differently.” Everything changed. Their hopes for him rose. Their patience and tolerance was beginning to pay off.

Erskine’s speech builds toward one particular anecdote that says everything to me about compassion and acceptance and how determined people can change their world. When Jimmy first went off to school, his parents escorted him to the bus, feeling the mixture of emotions every parent feels on that first day of genuine separation. He got on the bus, and it drove off. Erskine fought a lump in his throat and his wife wiped away a tear. As they walked home together, Erskine glanced around and in the front window of nearly every house, someone was standing there, giving him the thumbs up, a victory sign — the body language was clear. “Way to go! Congratulations!” As Erskine put it: “That was the beginning of seeing society make an about-face. They liked what they saw. They were beginning to feel good about including in their lives someone who had been shunned and shut away.”

As Jackie Robinson said, “A life is not important except for the effect it has on other lives.” And as Erskine summed up in his address: “One person can make a difference.”