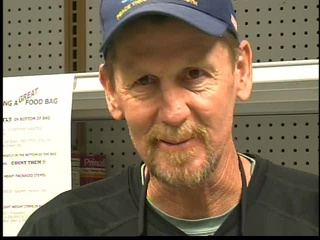 Two years ago, David Tally was a homeless man wandering around Tempe, Arizona, sleeping on a mat in a shelter. On n a day in November, his life became something like a fairy tale. He saw an unattended backpack at a light-rail station, with no owner in sight. So he bent down and flipped it open and saw stacks of cash adding up to $3,300.

Short-term, this money would have transformed his life: a cheap apartment of his own, new clothing, a meal in a restaurant.  Yet, he chose not to keep the money. And that choice, not the money, changed more than his life, it changed him. Later, he told a reporter for The Arizona Republic, “It didn’t feel right. I just couldn’t do it.”

Wrestling with his choices, he went to a man he trusted, Sam Sumner, his mentor at I-HELP, the organization he’d relied on to get his life on track. Sumner didn’t tell him what to do; he said it was Tally’s choice. After contemplating all his options, he realized he couldn’t take money from someone who, for all he knew, might have needed it even more than Tally did.

In the pack, Tally found a thumb drive that enabled him to track down the owner: Bryan Belanger. Belanger was a student who had forgotten the bag while talking on his cell phone—and he did badly need the money. He’d assembled the cash to buy a used car to replace one he’d wrecked in a recent accident. When he handed over the money to Belanger, the young man’s gratitude opened up Tally’s sense of his own self-worth. His act of honesty inspired so much praise for his selflessness that he began to realize how much he was capable of doing in the future.

Then the fairy tale really kicked into gear. The story in the Arizona Republic went viral. People magazine wrote him up. Diane Sawyer featured him on ABC. CNN interviewed him. People heard about his honesty. From around the world, they sought him out, offering to help him. He’s become a hero. Maxwell House coffee actually cast him in a 30-second commercial as part of a marketing campaign built around the idea of optimism.

Donations began to arrive  and his net worth rose into five figures. By returning the backpack, Tally discovered he didn’t need the money at all. An attorney helped straighten out his legal record for free. A dentist donated work on his teeth. A lawyer volunteered to help him fix his legal record so he could get his driver’s license back. After six months, his life was back in order and he was able to make amends for past violations by paying restitution and community service.  Tally did the right thing, stick to his goals for recovery, kept seeing his caseworker—and he emerged a new man.

Do you have stories of people, like Tally, who have turned their lives around by doing something good that might not at first seem to be in their own interest? What’s interesting to me is how Tally simply did the right thing, not calculating how he would benefit from it, not even imagining that it would benefit him, and then everything good in his life followed from that. Has this happened to you or someone you know?