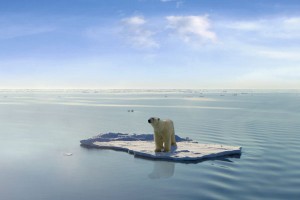 It’s encouraging to see more tempered rhetoric about climate change in light of the fact that we’re in a 15-year plateau of global temperatures which climate skeptics cite as evidence that global warming has stopped. Climate change proponents have adopted a less strident tone, allowing for what science still doesn’t know about the pace of change, in light of the facts. Yet they also stress that there are some sensible hypotheses for why we’ve hit an apparent lull in the warming: the deep oceans are absorbing the heat.

The Intergovernmental Panel on Climate Change‘s report last year confirmed that the globe’s temperatures have leveled off over the past 15 years. This wasn’t news, but with each passing year, scientists find themselves tasked with explaining why this variation in the upward rise of surface temperatures has lasted this long. Not only that, the polar ice cap got significantly chillier last year: there was a 29 percent increase in the amount of ocean covered with ice in September compared to the same time last year — equal to 533,000 square miles of new ice. Warming proponents point out that it’s “low-quality” ice, a bit slushy compared to what you make in your freezer. There was enough new pack-ice throughout the past year to completely block the Northwest Passage from the Atlantic to the Pacific, forcing a lot of ships to reroute. And this has been a brutal winter for the U.S.

None of this makes it any easier for those of us who accept what the vast majority of scientists believe: that climate change is a serious threat and requires action now. But it’s a good lesson about hubris and rhetoric. As with so many contentious issues that face us right now, in the U.S. and around the world, the attitudes of opponents are a big part of what keeps us from considering sensible action. With this issue, as with so many, most people pick a side and then brandish only the facts that confirm their stance. This hasn’t been happening with warming proponents. Thomas Lovejoy in the New York Times, reported on the leveling off trend and he praised the IPCC for being forthright about these statistics:“This is science sticking with the facts.” He explained that the pause in warming could be explained by the fact that the oceans are absorbing the heat as major currents shift. At some point, the oceans will release the heat.

From the same newspaper, Richard Miller, professor of physics at University of California, Berkeley examines the new information and points out that the globe has warmed slowly over the past fifty years, with occasional pauses in the warming. He says, “We don’t fully understand (these) past variations, but the frequent rises and falls, virtually a stair-step pattern, are part of the historic record, and there is no expectation that they will stop, whatever their cause” as reported in the New York Times.

Essentially, he’s saying let’s be safe rather than sorry. Let’s hope for the best but plan for the worst. “Most of us hope that global warming actually has stopped.” Alas, I think such optimism is premature. The current pause is consistent with numerous prior pauses. The slow rate of warming of the recent past is consistent with the kind of variability that some of us predicted nearly a decade ago.” In other words, the scientific consensus remains that global warming will become a greater and greater threat the longer we refuse to make the kind of changes needed to head it off. Even those who remain skeptical should support any effort toward less dependency on fossil fuel and more development of renewable energy sources. We may be unlocking supplies of oil and gas in North America to last for decades, and but no matter how much is down there, it’s a finite amount. It will eventually run out. Even if global warming were a chimera, it’s a spur toward the kind of innovation that will lead us to innovations which, half a century from now, will make oil and gas seem laughably inefficient as fuel. Evidence and statistics favor the threat of global warming. The consequences of that scenario are simply catastrophic. By the time our certainty about climate change moves to 100 percent, it will be too late. The need for urgent and aggressive action has to be now.