An Oath for Honesty 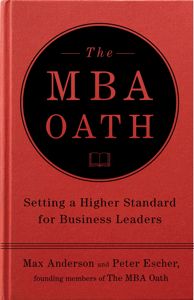 Right after the 2008 economic collapse, Harvard Business School did something remarkable. We had just come through a cataclysm that threatened to shatter the American economy. So Harvard offered its students the opportunity to swear an oath in allegiance to ethical behavior in business. Harvard students gathered together a coalition of supporters from 250 schools around the world, and partnered with the Aspen Institute and the World Economic Forum to refine the MBA Oath. As the New York Times reported:

Nearly 20 percent of the graduating class have signed “The M.B.A. Oath,” a voluntary student-led pledge that the goal of a business manager is to “serve the greater good.” It promises that Harvard M.B.A.s will act responsibly, ethically and refrain from advancing their “own narrow ambitions” at the expense of others.

The collapse terrified everyone who was paying attention. Who can forget the scene of Hank Paulson taking a knee as he pleaded for the Wall Street bailout? We’d been bending rules and closing our eyes to standards of credit-worthiness that had previously given the financial industry the backbone it needed to avoid high-risk wagers for quick gains. The collapse revealed how far we’d strayed from reasonable standards for making a profit with a watchful eye on the long-term future–and how far American capitalism had wandered from a focus on genuine, productive value. We’d given up on creating actual new value in favor of financial engineering focused on stock price.

Here are some highlights from the Oath:

It’s a remarkable and inspiring pledge. Yet you don’t hear much about the Oath. This can’t be good. The Wall Street bull is, once again, charging full-speed-ahead toward record prices. Again, we have an illusory sense that the U.S. economy is therefore strong, or at least stronger than Europe’s, Russia’s, South America’s, and all the rest. (Even China seems to be hitting a wall.) But it’s possible we’re forgetting the essence of that remarkable Oath, which for me lives in that last line: “continue to advance and create sustainable and inclusive prosperity.”

What led up to the 2008 collapse was a disconnection between Wall Street and the rest of America. Wall Street earned more and more on the foundation of an illusion that real estate was going to guarantee America’s economic future. Wages remained stagnant, and job growth was stalled. The massive correction we suffered woke everyone up to the need for our business community to find new ways to generate real value–new services and new products reaching out to new markets–so that wage growth would follow. Six years later, we still can’t admit to ourselves what needs to be done. Nothing has really changed. The income gap has grown wider, and wages haven’t risen in decades. This path isn’t sustainable. It’s as if we are actually trying to re-enact what happened in 2008.

We need to revive that Harvard Oath and make it the centerpiece of a new commitment to actually solving America’s most urgent challenge: to restart the engine of job growth and revitalize the middle class. We need our newly-minted MBAs to take the current income gap to heart, because they and all of our other business leaders will be the only ones in a position to make choices that can turn this country around. The private sector needs to invest its money in our greatest resource: the creativity and commitment of our employees. We need profit and productivity that arises out of their hope for the future, not the future of those who find ways to increase their wealth at the expense of the middle class–the employees who are the ones keeping the doors open for business. It means turning away from a mentality that treasures short-term shareholder value over the long-term vitality of our American experiment. We once showed the world what people can actually do if you set them free and give them an opportunity for excellence, and then reward them if they achieve it. We need to make free enterprise work again for everyone by offering every individual the opportunity to improve his or her life through hard work and good choices.